Women are like the sky. Limitless and endless. Their sacrifice, contributions are infinite. They are indestructible and never let the star inside them to dim even in the toughest war. This month. Bongjournal / qtvlive is celebrating International women's day by   unveiling inspiring stories of those remarkable women 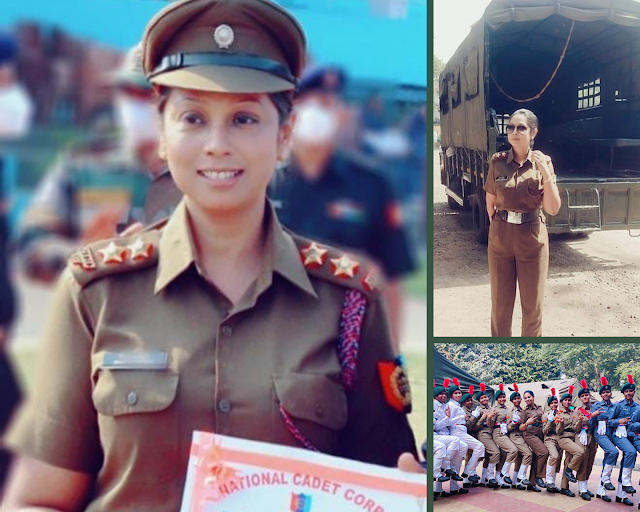 "Two stars on my shoulder are better than millions in the sky”  -  This is what she believes in. Lieutenant(Dr.) Biva Samadder ,(Phd, Gold medalist)  working as Lecturer and former head of the Department in Sociology and  Associate NCC officer in Surendranath College under 2 Bengal NCC Bn. After the three months hard work and rigorous Para Military training of PRCN course for Associate NCC officer in Officer’s Training Academy, Gwalior, now Biva Samaddar is posted as Lieutenant (Associate NCC officer) with a glorious result (Alfa Grading) and received two stars on shoulders (class one Gazetted   officer). 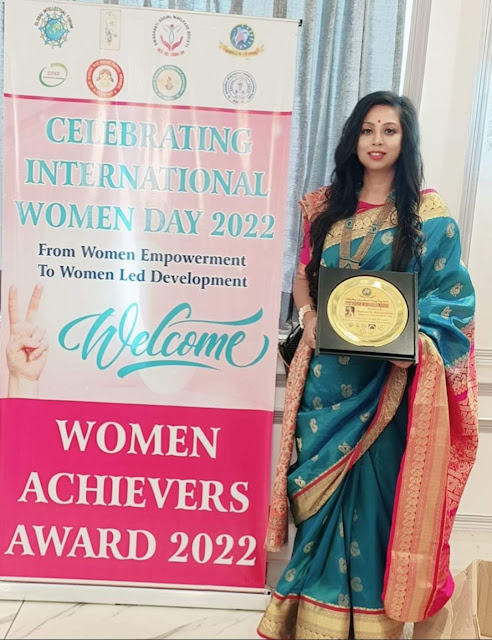 In our patriarchal society, there is a common thinking that defence and politics are not meant for women. However, we also have so many examples of women in power, like our former president Pratibha Patel, our present CM Mamata Banerjee and many more who have made a spectacular triumph in their journey of politics. We speak about Indian Air force officer Gunjan Saxena, but still find it difficult to accept the uniform even in the 21st century. I have found many,  particularly women staring at my uniform as if I am wearing something weird. It's very clear that gender discrimination is still prevalent, in the society. I get all my support from my husband. There is a thought that life gets marginalised once a girl gets married. But for me it got enriched. I completed my PhD. (Doctorate) after marriage. I got my job as a professor in college after marriage. 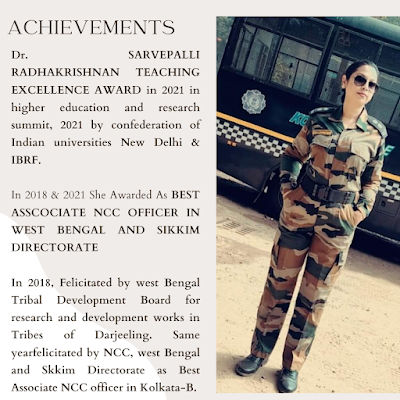 I have had a deep respect for the uniform since I started my journey as an NCC cadet. I always wanted to be a part of it. But after getting a job in  college, I had to shift my career to an academic stream. But there is a saying where there is a will there is a way. I came to know that returning to the uniform services is not that difficult if I achieve the position of NCC officer. I thank the principal of my college Dr Indranil Kar who also had a background of Sainik school for becoming so supportive. There are generally two divisions ie, senior division for boys and senior wings for girls. I was told to take the initiative. It was me who had the enterprise for mixed battalion and successfully opened NCC unit in my college after getting the affiliation in 2016. 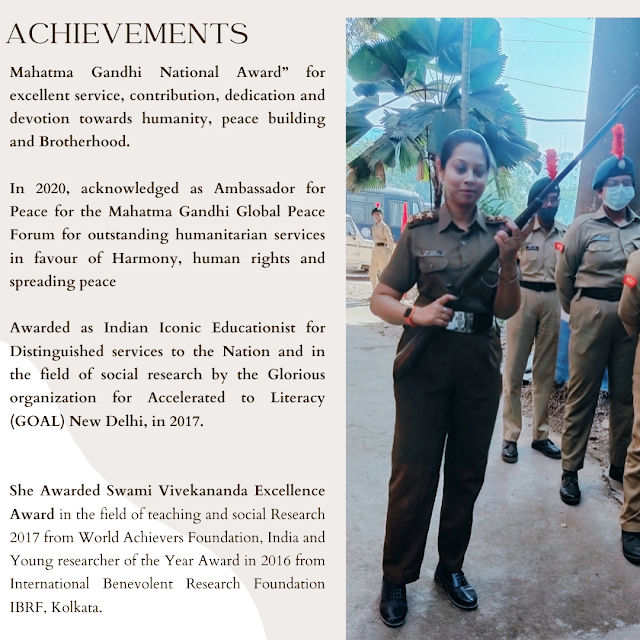 Unity and discipline is the aphorism of the NCC. That's why I have always insisted on seeing a greater number of women joining NCC. The basic paramilitary training could develop a discipline and leadership quality which actually will help them to overcome any difficult situation and to uplift themselves. My greatest achievement till now is when more girls insisted on joining NCC after seeing me in such a honorary position. I feel so proud when they say "after seeing you in uniform, we get a lot of courage to build our career as an officer like you. Before gaining the rank of class 1 gazetted officer I worked as caretaker officer. During those days participation of women are much less. But participation increased when I completed course work, put on my uniform and started giving training in artillery and weapon, taught them how to hold Point 22 Rifle and many more. 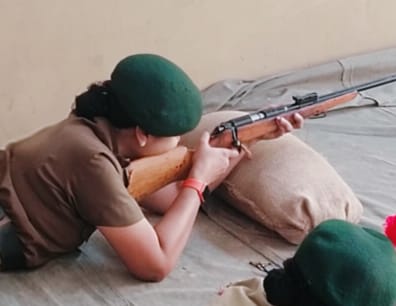 I still remember those days when I had to go through a rigorous training for three months at OTA Gwalior, away from my family. We don't have permission to even put any photos of our family. We even forget that we are women. We had to go through the toughest training as men. I find it so difficult to cope with all these that I made up my mind to come back after 15 days. But it was my son who insisted me to stay back and complete the whole training. Even my mother doubted my physical strength. I had never been through it, so she told me I am like 'sonar putul' (Golden Doll) and there is no need to go for the training there, as I have a steady job and a married life to look ahead to. At that time, I got immense support from my husband and in-laws. My son was my greatest strength who made all the sacrifices. He had dengue during the training. But no one informed me so that I could complete the paramilitary training. All my family took care of my son. I must say men are more supportive than women. On the other hand, I have found other female members of my in-law's house and even neighbors find it difficult to accept the concept of equality. 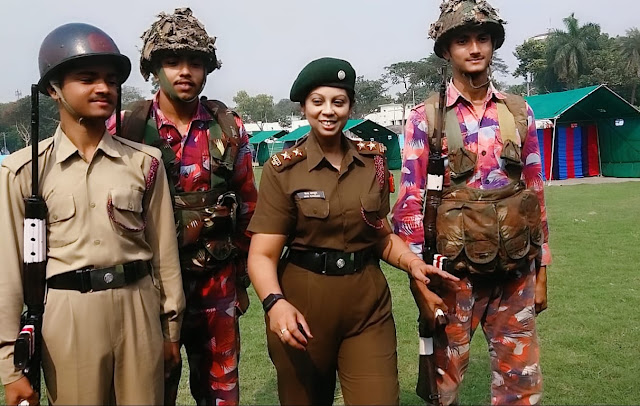 I always emphasise every youth should be joining NCC . In many situations we women find ourselves infirm. But this is not true. If we are doggedly determined to do something we will overcome all obstacles. Our government is encouraging courageous women to participate in the defense Forces and they are also considered for higher ranks in tandem with their men colleagues. 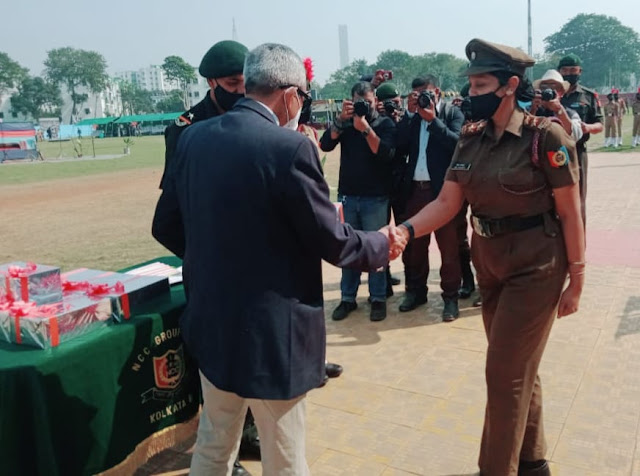 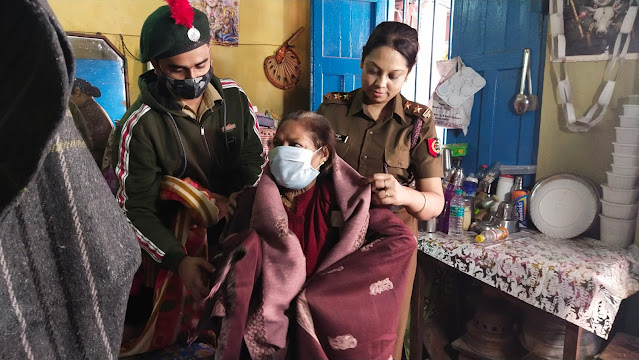